Amazing how busy the government has been after the publication of a letter signed by Venezuelan intellectuals and professors appeared in El Nacional! As this distinguished ghost blogger has reported, the government was not amused! They published an insulting letter in their official web page and, just by chance, decided to erase the name of Sofia Imber, one of the signatories, from the MACSSI (see here my “Sofia” post in The Devil's).

Today we learned that Mario Vargas Llosa sent a letter to President Hugo Chávez that appeared in El Nacional. 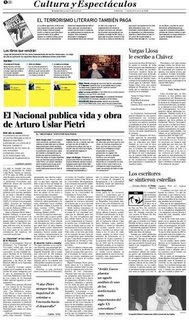 Here is the translation :

The International Foundation for Liberty has seen with consternation your recent anti-semitic manifestations. For this reason, we think that the recent letter signed by a group of Venezuelan intellectuals worried about such an abominable manifestation of racism was totally justified.

Among the signatories of the document was journalist Sofia Imber, and we have just learned that in retaliation for having added her voice to other democratic Venezuelans, the government has taken the decision to eliminate her name from the Museo de Arte Contemporáneo de Caracas Sofia Imber, of which she was the founder and that she led to be one of the most important and respected cultural institutions of Latin America.

We protest with all our energy for that mean way to punish an honorable Venezuelan for expressing her opinion. Such an unjust action, that we ask you to revoke immediately, will increase the discredit of your government but will not diminish at all the prestige of Sofia Imber.